Conventional therapeutic wisdom aside, people typically don’t hurt each other because they’re out of touch, unable to communicate, or can’t help themselves. All too frequently, they do hurtful things with impunity and entitlement simply to gratify their own needs. It’s an article of faith among many couples therapists that bad behavior in troubled relationships stems primarily from good intentions gone wrong. They see their clients as frightened children, who may hurt each other, but mean no harm. Followers of attachment theory feel that an underlying “fear of abandonment” drives couples’ conflicts, and the ultimate therapeutic goal is to create a warm, empathic experience, at least partly to make up for what the client missed the first time around.

Thirty years of working with couples and observing the limitations of this attitude has led me to develop an approach not focused on clients’ fears, insecurities, or wounded “inner child,” or on the deficiencies of their early attachments. Instead, it reflects the idea that people typically don’t hurt each other because they’re out of touch, unable to communicate, or can’t help themselves because of their early experiences: they usually know the harm they’re doing, and often it is quite deliberate. Rather than triggered by fear, shame, or insecurity, people do hurtful things with impunity and entitlement to gratify their own needs and wishes. It’s not that they’re “unconsciously recreating their past,” it’s that they’re engaging in the form of relationship with which they’re most familiar, one that, in fact, they prefer. 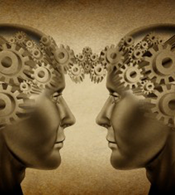 The key to grasping the roots of this “inner game” is to understand the brain’s ability to map another person’s mind—what I call “mind-mapping,” a process neuroscientists have studied as the Theory of Mind for the past 30 years. Mind-mapping is a survival skill that allows us to predict—and manipulate—other people’s behavior by understanding their thoughts, feelings, and motivations. The ability to mind-map generally emerges at age 4, as children’s brains develop, heralded by the advent of their capacity to tell “fibs.” These cute, clumsy attempts to lie coincide with a child’s realization that a parent’s mind is capable of holding false beliefs, combined with the dawning awareness that what people do depends on what’s in their mind. Mind-mapping reaches adult form around age 11, when children begin to understand adult sexual motivations and complex interpersonal agendas. With the exception of people suffering from conditions like schizophrenia, autism, and some forms of Asperger’s Syndrome, most adults have mind-mapping capabilities; however, therapists may underestimate its role in our relationships.

Marriage is inconceivable without some degree of mind-mapping: you need it to share a life with someone and understand what he or she means, wants, and desires. Of course, it comes in handy if you want to be a good liar, manipulator, or adulterer. You can’t be a successful therapist without it, either! Fully appreciating the subtleties of partners’ ability to mind-map each other can lead to stronger alliances with clients, and faster, more intense, and farther-reaching treatment. But doing this type of therapy means being drawn into depths of human motivation that many therapists prefer to avoid. Consider the following case.

Getting Past the Games

Married for 25 years, Stanley and Kristin, a couple in their early 50s, came to see me for a sexual problem. Throughout their marriage, Stanley had ejaculated shortly after intercourse had begun, but he denied understanding how upset and frustrated Kristin felt about it. Instead, he insisted the bigger problem was Kristin’s affair two years earlier. According to him, Kristin had mentioned her dissatisfaction only a few times during their marriage, and, given that they were having sex twice a week, and that Kristin was frequently orgasmic, he insisted that, as far as he knew, his rapid orgasms were a problem only for him.

When I asked Kristin what she thought, she acknowledged keeping her disappointment to herself all these years because she didn’t want to embarrass Stanley, who’d been reluctant to seek treatment. Nevertheless, sometimes she cried after sex, and occasionally she suggested they have a second go-round.

Upon hearing this, Stanley immediately objected. “Oh come on! You rarely did that! Do you expect me to read your mind?” Kristin acknowledged that she’d rarely proposed this, and Stanley appeared to emerge as the victorious and aggrieved party.

I then asked Kristin, “What made you think Stanley was embarrassed about his rapid ejaculations?” She described how he’d turn on his side with his back to her after sex and wouldn’t talk to her, so I asked, a bit skeptically, “So Stanley has been embarrassed a couple of times a week for 25 years?” I was pointing out what Stanley and Kristin were avoiding: the incongruity of thinking someone would continue to be embarrassed about something repeated so frequently over so many years, or if he was, considering the question of why his interest in sex hadn’t waned in the face of such humiliation.

Kristin replied, “Well, that’s what he said whenever I asked him.”

It’s important for a therapist to pay close attention to provocative remarks. I immediately noticed that in response to my comment questioning his embarrassment, Stanley looked at me and smiled. To me, it was the sly, slightly abashed look of someone being found out. At this point, Stanley interjected in a guarded tone, “Do you mean you don’t think I was embarrassed?”

I said, “I’m not sure if you were embarrassed or not, but I’m asking Kristin for details so I can figure it out.”

A bit defensively Stanley said, “I was just too embarrassed to go for treatment.”

I replied, “That may be true, but that’s not the same as being embarrassed when you come quickly with Kristin. But let’s focus on what’s happening right now. You haven’t answered my question about what you’re embarrassed about now.”

Stanley continued as if he didn’t get my point. “I didn’t think it was such a big deal because Kristin could still have her orgasm with me. We usually came together.” 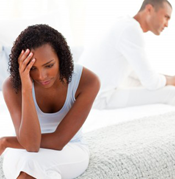 For a moment, I was taken aback by Kristin’s outburst—not by her anger, but by what she was angry about. She’d been triggered when I’d raised the possibility that Stanley wasn’t embarrassed about his sexual performance, but she was still assuming his embarrassment to be an established fact in their relationship. It was as if she was trying to close off our discussion by starting an argument—a familiar tactic in troubled couples.

“For crying out loud,” replied Stanley, “I’m a business guy! I know about making money. I don’t know about relationships. My family was cold and distant. We never talked about feelings.”

Neither Kristin nor Stanley wanted to consider a darker view of their last 25 years than the one they presented. In my approach with couples, I see these moments as opportunities, rather than things to be avoided. I turned to her and asked, “What makes you think Stanley didn’t know you were unhappy and frustrated?”

“That’s what he said whenever I brought it up. He’s said that a lot since my affair, and he’s even saying it now. According to Stanley, I’m more at fault because I knew he’d be hurt by my affair, but he didn’t know I was so sexually unhappy with him. This is so mind-twisting! For 25 years, I’m not supposed to move during sex because it’ll make him orgasm quicker. Now it’s my fault because I didn’t express my dissatisfactions more clearly! He’s even making my ability to have orgasms quickly the reason he didn’t go for treatment!”

Kristin suddenly seemed willing to confront unsavory aspects of their marriage she’d previously overlooked, but the possibility that Stanley’s sexual pattern wasn’t due to embarrassment was darker than her mind willingly tolerated. I figured she’d be upset if this turned out to be true, but therapy built on a false picture of their lives wouldn’t provide a long-lasting resolution.

I said to Stanley, “It looks like Kristin is really angry at you.”

“I can see that,” said Stanley glumly.

“But the real problem is Kristin may be angry at you for relatively minor reasons. If you’re interested in saving your marriage and putting the past behind you, it’s important that she be angry at you for the right reasons.” I was purposely adding intensity to the moment. Building the significance of a couple’s situation in the midst of crisis can encourage the best in both partners to stand up.

“Well,” I said, “for bigger things than being embarrassed or ashamed about your sexual problem, and double-binding Kristin about expressing her dissatisfactions.” Thirty minutes into our first session, things were starting to deepen. The foundation was being laid for the hard work to come.

Next page in this article