Like most therapists, I continually assess clients’ strengths and weaknesses and gauge my interventions accordingly. What’s different in my work is that while most therapists avoid saying things that their client might find upsetting, I push things further, earlier than colleagues who initially focus on their clients’ frailties, fears, and hypersensitivities. From the beginning, I tune into people’s strengths—their sense of right and wrong, their personal integrity, their willingness to tolerate pain for growth. Every day in my office, I’m impressed by people’s ability to act out of their deepest principles and values, even while thoroughly petrified and unsure of the outcome. I see effective therapy as being grounded in people’s resilience and their highest aspirations, rather than calling forth their fears, insecurities, and immaturities.

Many couples who come to see me are in crisis and on the verge of divorce. Perhaps an affair has been discovered, or arguments are escalating, or one or both partners are ready to leave. Crisis presents powerful opportunities for personal growth and relationship change if therapists don’t rush in and try to make things “stable” and reestablish the status quo. I see my role as challenging clients to confront and deal with dilemmas and conflicts in their current crisis, rather than dampening the situation, or making “security and safety” the primary focus of interventions. I avoid positive reframing to mollify people’s anger and resentments. I make no assumption that people operate out of misguided attempts at self-protection. Instead, I believe that couples’ current instability is their best chance to “clean up their mess” and build a solider relationship.

Challenging whether Stanley’s sexual pattern was driven by something besides embarrassment threatened to smudge the picture that Stanley and Kristin were painting. Posing necessary challenges that profoundly disorient a couple is a major part of my job. So I said to Stanley, “I see the possibility that the way you and Kristin have understood your sex life may not be accurate. Despite what you’re saying, my impression is that you’re actually good at figuring out what other people are thinking. How do I know that? You’ve been doing that with me since this session began. When I asked Kristin how you rolled over after sex, you asked me if I questioned your embarrassment. You correctly saw where my questions were headed, and you reacted to it. Several times you flashed a smile of recognition before I finished making my point. Once you actually finished my sentence for me. Another time you said, ‘You’re probably wondering why I didn’t go for treatment.’ You couldn’t do these things if you couldn’t map my mind and see where I was headed. In fact, you’re not only an excellent mind-mapper, you’re also excellent at keeping other people from mapping your mind. That’s how you’ve been able to keep this going with Kristin for decades.”

Stanley took his time responding. “How do you know I could read Kristin during sex?”

“This isn’t an ability you’ve recently developed. Kids usually develop mind-mapping ability around age 4. And from what I’ve seen so far today, I’d guess you were quite aware of Kristin’s dissatisfaction, frustration, and unhappiness.”

Stanley looked down sadly, and then at Kristin. “If I knew it, I didn’t know I knew it. It must have been unconscious.”

I couldn’t let him off the hook so easily. “On the contrary, someone can’t operate as effectively as you are without consciously mapping other people’s minds,” I said. “I’m not going to debate this with you. One possibility is you were just doing this to protect yourself from being rejected because you felt inadequate. This is the explanation you and Kristin seem to like best, and the one most therapists will give you. But I keep thinking about you having sex twice a week for 25 years, and I can’t imagine you emotionally dying each time. So another possible picture is that you enjoyed taking advantage of her apparent naivety. I have to wonder if you took pleasure in tying Kristin up in emotional knots, having such control, and keeping her ‘captive.’”

“That would be a really cruel thing to do,” Stanley remarked.

“It would indeed,” I replied. 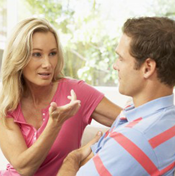 Stanley and Kristin locked eyes for an eternity. Neither said a word. Stanley’s face was impassive. The silence in the room was deafening.

“I’ll think about it,” Stanley said, implying he’d do it later.

“I hope both of you do that,” I replied, looking at Kristin.

“Why are you encouraging Kristin to be suspicious of me?” asked Stanley, trying to map my mind.

“You just reinforced my belief you have mind-mapping ability. You mapped out that I was encouraging your wife. But I’m not encouraging suspicion of you, I’m encouraging Kristin to confront herself, confront what she knows. If she resolves this by sticking her head in the sand or lying to herself, neither she nor you will ever really be secure. I’m not against you. I’m trying to help you, but not by encouraging you to trust me or my judgment blindly. I want you to look at this for yourself.

“If any of this is true, Stanley, you’re in a tight spot because if Kristin realizes this after you’ve supposedly made a new start, your relationship is likely over. But if it’s true, and you handle this in ways that demonstrate remorse and Kristin can respect, you may save your relationship. In any event, you can rebuild your own integrity, and at least have a relationship with yourself. I can’t promise what Kristin might do. What’s important is that you handle this in a way that best fits your true self-interest.”

A critical assumption in my approach is that clients understand more about their own motives and the reactions of their partners than many therapists give them credit for. We prefer to think clients are so “out of touch” they don’t foresee the impact when they say or do cruel, hurtful, inconsiderate things. This is how we maintain the cherished shibboleth: “People always do the best they can at the time.” Unfortunately, basic decency isn’t something we can take for granted. “Ambivalent attachment” and “insecure attachment” don’t begin to address the depth of hatred, animosity, and resentment that develop in many families and marriages. I use the term normal marital sadism to describe the nonreportable domestic violence that partners often inflict on each other.

People like Stanley look like they can’t mind-map because they’ve gone one step better: they’ve learned to map others surreptitiously and screen their own mind from being mapped. They’re often so good at this they slip under their therapists’ radar—which is why therapists frequently believe clients have less awareness than they actually do. Over the years, I’ve realized that clients who look the most “skill deficient” are often the shrewdest manipulators. Their mind-masking ability develops as an essential survival skill with parents who were intrusive and controlling, manipulative, emotionally unstable, overly dependent, violent and impulsive, or sexually inappropriate. Mind-mapping and mind-masking allow defensive and hypervigilant clients to see where other people’s minds are headed and “play three moves ahead” to fend off perceived threats, giving them more maneuvering room to dodge issues they don’t want to face. Likewise, if they’re having an affair or want to torture their partner, mind-mapping their mate and masking their own mind are all-important abilities. Clients are always mapping their therapist’s mind, while often masking their own minds, and they’re frequently better at this than we are.

Stanley and Kristin left that day not knowing the future course of their relationship. This often happens after a first session with a couple. From my viewpoint, Stanley and Kristin’s marriage wasn’t falling apart: they were embarking on a path I’ve been down with many clients, a critical turning point in which they are confronted with the conscious decision to choose to become the people they want to be.

At the start of their second session, Kristin said, “I’ve had a very rough time since our last session. Your confronting Stanley made me look deeper into myself than I’ve wanted to, and face things I’ve avoided in Stanley, in myself, in my marriage, and in my family. I never saw this coming. This isn’t how I expected treatment would go.” She looked healthier and more attractive, and seemed more grounded and empowered, than at the start of our prior session.

“Several times I had the impulse to tell Stanley to get the hell out. I’m still not sure I can ever forgive him. But what he’s done doesn’t come as a complete shock. Truthfully, I’ve always known Stanley is a selfish bastard, but I didn’t want to admit it to myself. I always make excuses for him in my mind because I love him. I’ve learned to ‘ignore’ what I read in other people. I’m good at lying to myself, from years of practice with my parents.”

Kristin continued, “As a child, when I realized my mother was having affairs, I was disgusted—at first just with her, but then with my father, too. I’d thought he was a good guy, the good parent, someone I could count on. I’ve always wondered why he didn’t see what she was doing. Since our last session, I remembered a time when it was so obvious I realized he did see it, but wouldn’t confront it. I thought he was so great for always praising my mother to us, until I realized he was selling us kids out. He didn’t want to deal with the mess. I was always afraid that if I confronted our ‘wonderful family’ façade, my parents would separate, and my brother and I could end up with relatives, because neither of my parents would have taken us in by themselves.”

Prior page in this article

Next page in this article